I believe the days of running tights, gloves, and headbands are behind us.

At least they are here in North Carolina. The weather for the upcoming week looks promising! 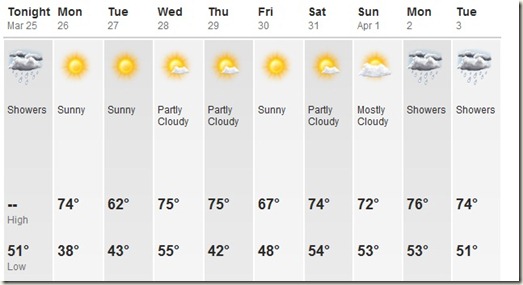 Yesterday was my first run since the half and it was a hot one. I got to wear shorts for the first time since…the marathon? and it felt darn good to feel the wind against my legs.

I didn’t know how far I wanted to go, or how long the rain would hold out, so I set off towards the park and had an easy 5 mile run.

It was nice to be running the park again. I’d been running on sidewalks during this past “training” period since it’s safer than the park when it’s dawn/dusk. I’ll take the longer days we’re having along with that nice weather, too!

After the run I did my usual stretch/cool down, shower then pulled my new compression sleeves from the NYC Half expo.

I love that I can discreetly wear these under work pants during training this summer for the MCM. The fact that were free is an added bonus!

Last week’s recovery after the half went well. I had hip pain after the race last Sunday, but after thoroughly icing it overnight, I woke up to a seemingly perfect hip! It hasn’t given me any trouble since and I’m really happy about that.

By Wednesday/Thursday I was able to take the stairs down looking pretty normal and without a look of agony on my face. The few days following the race I was taking them backwards..does wonders for those sore quads!

Today was more of a relaxing day. I did some yoga and pilates at home while Brandon was working, then rounded out the day with a walk with Owen and some chores around the house.

I can’t wait to get back into a normal exercise routine this week!

What are your workouts looking like? Any ideas for me to spice it up?

Today I passed another mile marker in running. Today I finished 6 weeks of physical therapy, 15 weeks after my first marathon.

What a journey these past 15 weeks have been. Frustration, doubt, hope, physical and mental pain. Today, I won.

I’m so glad I stuck with it and didn’t throw in the towel for an easier way out, even though there were times (namely, week 3 of PT) that I thought it just wasn’t working.

Honestly, just 2 weeks ago I had a melt down because the pain hadn’t gone away in 10 full days. That’s just after we discovered how my hip hates the treadmill and my PT poked around in my hip, which was uncomfortable, but did the trick. The week after that (last week) was the best running week I’ve had since before the marathon. I’m happy to report this week is much like last week.

I haven’t ran the race yet, we’re still 24 days away, but I’m not and haven’t been measuring my success by the race. My success is being measured everyday in the little victories I accomplish from running another mile farther, waking up without pain, and getting excited instead of getting anxious to run.

I am so excited and not to be boastful, but proud of how far I’ve come. Literally, 10 weeks ago I couldn’t even run a mile without having to stop because of the pain. I’m now up to 6 miles, pain-free.

That’s 2 hours each week dedicated to strengthening exercises one-on-one with my therapist, lots of poking/pressing/pulling around in my hip by my PT, extra exercises at home for 20+ minutes/night 6 days per week, trying to decide if I should get an MRI (never did and glad I didn’t!), all while trying to increase my mileage so I have some kind of shot of finishing this half marathon. I’m confident I will now.

On to bigger and better things! Details to come…

P.S. If you need some inspiration today, here’s an oldie but goodie!

I’ve made my return from being MIA over the past couple of weeks. I’ve been so busy I’ve definitely slacked in this area so here’s a catch-up. Sorry in advance for such length.

I’ve stayed true to the new goals I set for 2012 and experimented in the kitchen by cooking tofu a couple weeks ago! I followed this tutorial and it turned out pretty good. It didn’t take too terribly long to make and the husband approved. I served it with onions, mushrooms and asparagus over whole grain pasta. Yum!

Still working on that hip. Here’s what has been going down.

I’ve completed 6 physical therapy sessions with 5 left to go. I love going to those appointments. My therapist is also a runner, so we always have something to talk about while I’m in therapy. He’s got me doing a series of different exercises while I’m with him in addition to the exercises I’m doing at home.

He’s definitely (and so have I) noticed that I’m getting stronger which is encouraging. I seriously leave my appointments with my hip muscles totally fatigued. He has me doing more challenging exercises which I love because I love being challenged and continuously improving.

I had my first run of more than 20 minutes about 1.5 weeks ago. I ran outside for 2.9 miles and felt pretty freakin’ amazing. I had been so reluctant and a little fearful to run more than 20 minutes because I thought I’d end up hurting myself further. When I didn’t, I was elated!

That was Saturday. On Monday I ran 3.1 miles pain-free, finally ran that 5k I was supposed to run back in December. Then on Wednesday I ran 3.6 miles…on the treadmill. After the run (the next day) I had a lot of pain. I went to PT on Friday and we did exercises but a lot of soft tissue work. Feels like a massage, I love it.

In the mean time, Thursday before that PT appointment I went back to my sports medicine doctor who noticed I was looking brighter and a lot happier since the last time I’d seen him. I told him about my progress and he was happy, but told me I definitely qualified for an MRI because of the chronicity of the pain. I asked him how it would change our treatment plan and he was honest and said it probably wouldn’t change anything unless he saw something that surprised him since we already ruled out a stress fracture and I have great range of motion in my hip. So I opted out again.

While I was there, I asked him what he thought my chances of running a marathon this year was. Thankfully he told me he thought I would definitely be ready for one towards the end of the year and I was pretty pumped. I’ve been feverishly searching and contemplating which one I want to register for, but I don’t think I’ll do it until I’m further healed. I would hate to sign up and then be unable to run – especially when marathons can be upwards of $100 a pop. To be determined..

Yesterday I was back at physical therapy and I told Justin about my PT sessions and running from the previous week (he was gone on vacation and I had other therapists). He said he heard and said as soon as he knew I ran on the treadmill that pretty much gave it away.

He explained that I should run outside because the treadmill drags your foot backwards instead of your body doing the work, creating a constant resistance that your hip flexors (i.e. my problem area) has to compensate for. I was happy to hear it was something that simple. I thought it was the distance that was giving me the problem but he assured me the distance was fine.

After a warm-up we did all soft-tissue work. He taught me a few different stretches and a dynamic warm-up to perform before I run. I left there feeling like a whole new person. That’s why every time I get down on myself for still having pain, I get hope again because I leave there a-ok.

I’m feeling good today, as I started the day off with a 3 mile morning run. It was awesome to start the day with an outside run; I wish I could do it more often. I go back to therapy tomorrow, so yay for that.

This whole injury thing is so complex. I have a physical injury but mentally, it’s been so much harder.

I asked my PT about doing the NYC Half Marathon and he said he doesn’t see a problem with me doing it so long as I know to take walk breaks throughout. I told him my attitude about it which is:

I have no expectations of setting a PR and beating my last half marathon time. I’m going out there just to run, have fun, and enjoy a big city race. I realize I’ll probably have to stop and walk a lot but I’m fine with that. I definitely wouldn’t be doing the race had I not already paid for it and a planned a trip, but I’ll do what I can and what my body allows me to do when that day comes.

He said I have a really good outlook about it so I’m glad I am where I need to be mentally, even if I’m not there physically. My health is more important to me than any race will ever be and I keep reminding myself of that.

Am I frustrated that I can’t run long distances? Of course. I miss doing what I love.

But I can still run.

There are a lot of sayings out there that mention things like, “you don’t know what you have until you’ve lost it.” I can honestly say that I did know what I had and I still realize it. I was thankful every single day of marathon training that I could lace up my shoes and run. I didn’t care that it was 98 degrees, that I was tired, or that I missed out on after-work drinks with friends.

I remember thanking God during the majority of my runs for allowing my body to be able to do this. I still thank Him, because my injury is nothing compared to what some people are going through.

I think ultimately this injury has made me grow into a better runner. I’ve been able to focus more on myself as a runner, what my body can do, and how to listen to it. I am still ever grateful for every mile I run, even if that tops at 3 right now.

I’ve still got some progress to make and I do get frustrated, probably every day. But I know I’m better for it and I can’t wait to see how I come out on the other side.

Take a Look Around

States I Have Run In